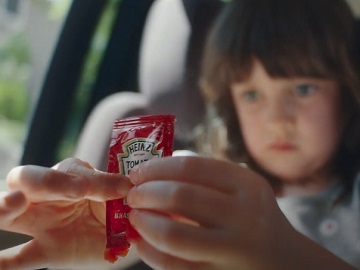 “Life can be a lot to handle, but there’s plenty of magic in all of that chaos.” This is the idea behind the latest HEINZ commercial, titled “This Magic Moment”.

The spot features a diverse cast of families who turn a somehow “bad” moment into a funny and memorable one. Thus, after a bickering at the table, due to a prank made by the kids on their dad, the family get over it and enjoy their meal laughing and having fun, a father whose barbecue is ruined by the kids playing with the hose gets upset at first, but then he decides to join in the fun by using the hose, too, and shower the children, a mother at the beach with her two children, including a toddler, realizes that the seagulls eager to eat their sandwiches was a source of laughter for her kids, not something annoying, as she initially thought, a father driving the car is shocked to see his daughter in the back seat using the Heinz Ketchup Single Serve Packet on her burger, but he doesn’t let this episode ruin the trip and smiles, seeing the smile on the girl’s face, and a father working from home, with his kids wreaking havoc around him while he’s in a video call, plays with them later on and lets them put on some lipstick on his lips, too.

The song used in the ad is the 1960 single “This Magic Moment” by The Drifters.