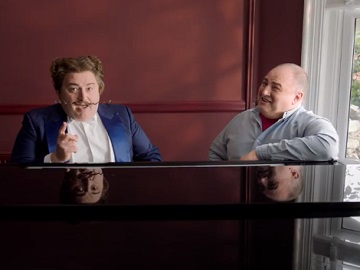 Wynne Evans, the Welsh tenor who plays Gio Compario, GoCompare’s longtime mascot, is back to the small screen in a new ad campaign for the comparison website.

The 30-second spot features Evans and Compario sitting near a piano and talking about the GoCompare’s bright new tune. “So you’re telling me a bright new idea like £250 free access cover deserves a bright new tune?” Evans asks his fellow. The latter begins playing the piano and performing the new song, which is as follows: “GoCompare, GoCompare, pioneers for years and always fair. Their passion is for saving, the nation should be raving about the deals they’ll find, GoCompare, GoCompare”. Evans concludes the advert by saying that it’s bright ideas like that that have made them such a trusted comparison site, which makes Compario admit he could not have put it better himself.

Compario, who became GoCompare’s mascot in 2009 and has appeared, since then, in numerous ads, has become one of the longest-running characters in British advertising. In 2015, after a 18-month break, he returned as Gio Compario in a new major national advertising campaign, even though the same year he had been ranked “the most annoying UK ad mascot ever”.

Last year, Compario was featured in several ads that re-enacted car accidents that led to real insurance claims. One of them showed him having a car accident in his attempt to avoid hitting a deer standing in the middle of the road and another one showed him as Margaret Mahoney, a woman who hit a tree fallen on the road because she didn’t have enough time to brake and had her car damaged.