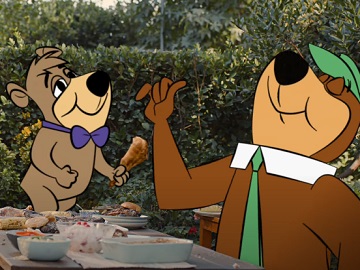 Yogi Bear and Boo Boo join a BBQ in the latest GEICO ad, part of the company’s “Bundling Made Easy” campaign.

The spot opens with a married couple at a garden BBQ party, saying they are thrilled they have finally found their dream home in the mountains.

The wife points out that the views are great and the air is fresh, but that it is bear country, though. At this point, their fun is interrupted by Yogi Bear and Boo Boo, who make everyone rush inside. The two bears treat themselves with corn on the cob, chicken, and a T-bone.

In the meantime, the woman and her husband – who are in the house, looking at the two thieves – admit that GEICO makes bundling their home and car insurance easy and saves them a ton of money.

As he leaves, taking the cobbler to go, the Yogi Bear declares he’s smarter than the average bear.

At the end of the commercial, the woman tells her dad, who’s up in a tree, that he can now get off because the bears are gone, and the voiceover urges viewers to go to GEICO’s website for bundling made easy.