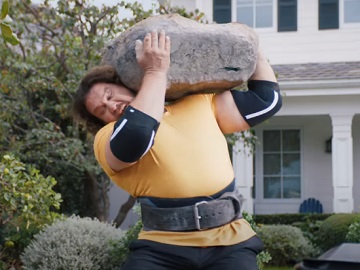 GEICO has released a new installment in its “What Are You Waiting For?” campaign.

The spot opens with a man named Walter (played by David Douglas) being informed by the voiceover, while he’s breaking down a box for recycling purposes, that GEICO could save him hundreds on car insurance and a whole lot more. “So what are you waiting for? World’s strongest man Martins Licis to help you break down boxes?” the voiceover asks him. At this point, Licis shows up and, after lifting a huge decorative rock places nearby, drops it over a box. Other two boxes are broken down by the strongman with two waste bins, and then the garbage truck becomes his “target”. “You’re going down. Down to the recycling center,” Licis declares while dragging the huge vehicle down the street, with a rope.

At the end of the commercial, the voiceover urges viewers to switch to GEICO and see all the ways they could save.

A previous commercial in the campaign features the Tag Team members helping out a woman with dessert.

Equipped with ice cream scoops, Cecil Glenn and Steve Gibson are putting ice cream in bowls while singing a new version of their 1993 single “Whoomp! (There It Is)”, including the famous “Shaka-laka-Shaka-laka-shaka-laka” part, making the woman and her husband relive the ’90s spirit and bust some dance moves.