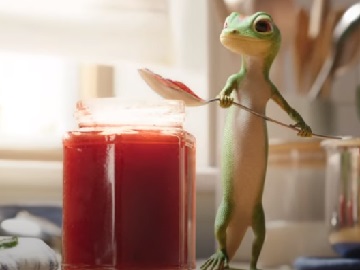 The spot opens with the mascot saying that GEICO’s 85 years isn’t just about time, it means experience, and makes an analogy with him making jams. “If I told you I’d been jarring raspberry preserves for 85 years what would you think? Well, at first you’d be like ‘That has gotta be some Scrummy Yummy Jam!’ And then you’d think ‘He looks fantastic! I must know his skin care routine.'” the Gecko says, taking a bite from a slice of toast with raspberry jam.

Previous: Subway Australia Woman Pressed Up Against the Glass Commercial Song
Next: I Saw It First Love Island Advert Song