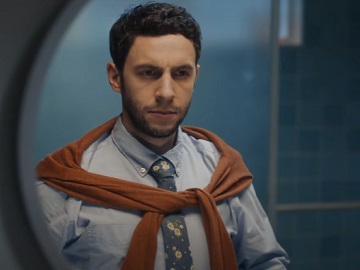 GEICO continues its Bundling Made Easy campaign with a new installment, featuring a couple of renters who are enjoying their new apartment but have a bit too much water pressure though.

The spot opens with the couple, played by Nick Smoke and Phoebe Neidhardt, talking about the things they like at their apartment. They list the parkings, the big closets, but the man also mentions there’s too much pressure in the bathroom.

Viewers get to understand what he refers to as he is shown in the bathroom getting ready for a dinner with his future in-laws and hearing objects in the bathroom (such as sink, light socket, shower head and bathtub) talking to him. They wish him good luck and give him pieces of advice, such as to not overthink it and not talk about his cover band, his fantasy team and his cat.

The woman then adds that at least GEICO makes bundling their renters and car insurance easy, helping them save a lot of money, too.