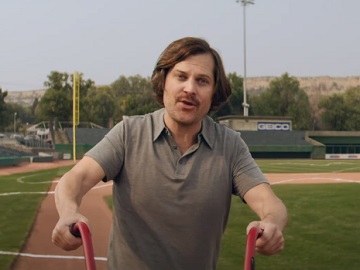 GEICO promotes its motorcycle coverages in a hilarious new commercial.

The spot features Carl, a young man who was supposed to line a baseball field but started daydreaming that he was riding a motorcycle and did quite a mess on the field. The worker, imagining himself as a rider on the open road and singing “Build Me Up Buttercup” by The Foundations, ruined the field and hoped that no one would notice. However, looking around, he realizes that it can’t pass unnoticed.

At the end of the commercial, the voiceover says that, “If you ride, you get it,” and adds the tagline “15 minutes could save you 15% or more”.

GEICO says it offers “cheap insurance rates and great coverage” regardless of the two-wheel vehicle you have, be it a sport bike, moped, cruiser, touring bike, standard, or antique.