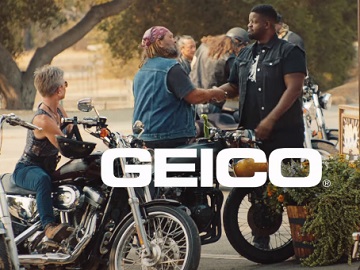 GEICO promotes its Motorcycle insurance in a new commercial featuring The Gecko.

The spot opens with a waiter played by Chad Donella telling a customer who’s looking at the Gecko talking to a rider who had parked his motorcycle nearby that The Gecko is talking about motorcycle insurance and people love it.

“Of course they love the savings they’re gonna get with GEICO, but … it goes beyond that,” the waiter also says, while the woman looks at the tiny gecko as he tells the tough guy that he deserves to save until he concludes that he does deserves to save and almost bursts into tears.

Witnessing the scene, the coffee shop employee also mentions that “he (The Gecko) has a way of making you feel seen”.

The commercial, which also stars Tracey A. Leigh as the customer, Bodie Newcomb as the motorcyclist and Terrell Lee as his friend, ends with the voiceover urging viewers to bundle car and motorcycle insurance and save at GEICO.com.
The song used in the ad is “Words of Love (Vocal)” by DeWolfe.