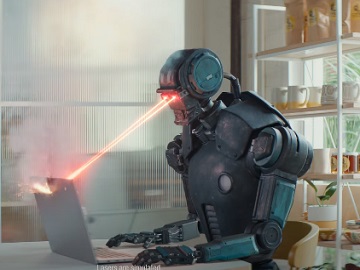 GEICO has dropped a new ad in its “More Ways to Save” campaign. This time, the spot takes a jab at the online verification tests designed to make sure you are not a robot.

Titled “Too Many Robot Tests,” the commercial features a robot in a coffee shop, that needs to pass one of those verification tests. After trying to identify an “overpass” and decipher a captcha text, he gets frustrated and damages the laptop.

“Nobody wants more robot tests. But we could all use more ways to save,” the voiceover says at the end of the commercial, which sees the robot lasering also his cup of coffee because his name was misspelled due to a human error.