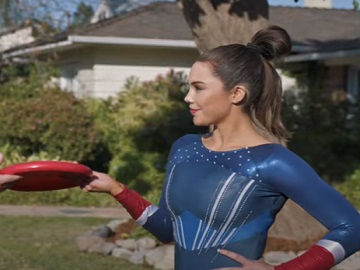 GEICO has enlisted McKayla Maroney to star in its latest ad, part of the “What Are You Waiting For?” campaign.

“Jason, did you know GEICO could save you hundreds on car insurance and a whole lot more? So what are you waiting for? McKayla Maroney to get your Frisbee off the roof?” the voiceover asks a guy playing Frisbee in the opening of the 30-second commercial, which sees the gymnast saving the day for him, when his Frisbee gets stuck on the roof. She shows up and, after putting chalk on her hands, does a bunch of flips and lands on the roof. She gets the Frisbee and gives it back to the guys who lose it again, played by Alex Dobrenko and Esteban Dager.

The second time, though, McKayla is no longer so eager to jump on the roof and get it back.

GEICO’s “What Are You Waiting For?” campaign also features the strongman Martins Licis, who demonstrates new ways to break down boxes that can also help you deal with some of the frustration of having to break down boxes in the first place, and Stephen Gibson & DC Glenn, aka Tag Team, who helped a woman with dessert and sang an original song set to the tune of their 1993 single “Whoomp! (There It Is)”.