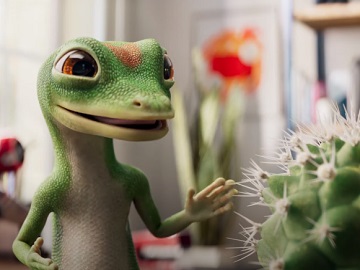 The Gecko discusses the things in life that just go together in the latest GEICO ad, and mentions bundling your home and car insurance. However, he notes that you wouldn’t bundle just anything.

The spot features the company’s longtime mascot on a desk, near a GEICO-personalized cup, saying that people like GEICO because it’s just easy. He then brings in the “bundling” notion. “You’ve got car insurance here and home insurance there. Why not… schuuuzp…. put them together? Save even more. Some things are just better together, aren’t they?” he asks, giving the example of tea and crumpets. He then points out that you wouldn’t bundle just anything, like a porcupine in a balloon factory because that would be a mess.

“GEICO. Save even more when you bundle home and car insurance,” the voiceover says at the end of the commercial.