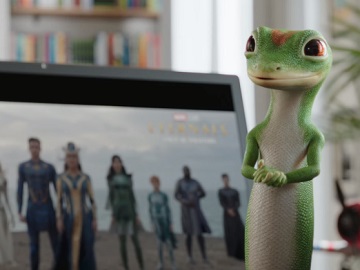 The Gecko becomes an Eternal in the latest GEICO ad, which promotes the upcoming Marvel Studios’ “Eternals” movie.

The spot opens with the voiceover saying that the Eternals are a race of immortal beings who have helped guide humans throughout history. At this point, the Gecko, who was watching Eternals on TV, is asking himself what if he was an Eternal and imagines himself in the middle of the action. “Ladies and gentlemen, did you know that GEICO has even more ways to save you money?” he says to dozens of people who are looking at him. He continues his speech by listing the insurance coverages the company offers, such as car, home, motorcycle and RV, but those around him start running away, shocked by “the talking lizard”. “Oh, is it something I said?” the Gecko asks himself seeing that everybody left. He concludes it’s best if he just leaves it to the professionals, while in the background the Eternals are seen.

The commercial ends with the voiceover urging viewers to see Marvel Studios’ Eternals, in theaters November 5.
GEICO is not the only company promoting the upcoming Eternals movie. Lexus has also released a spot featuring Kumail Nanjiani, who plays Kingo in the movie, driving the all-new Lexus NX.

Directed by Chloé Zhao, Eternals features an exciting new team of Super Heroes in the Marvel Cinematic Universe, ancient aliens who have been living on Earth in secret for thousands of years. Following the events of Avengers: Endgame, an unexpected tragedy forces them out of the shadows to reunite against mankind’s most ancient enemy, the Deviants. The cast also includes Angelina Jolie, Gemma Chan, Richard Madden, Kit Harrington, Salma Hayek, Lia McHugh and Don Lee.