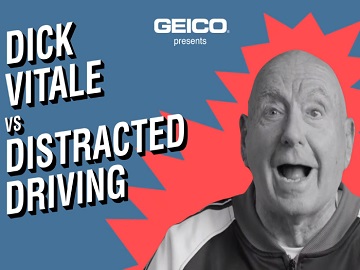 GEICO has released a series of new ads for its Distracted Driving feature, available in the GEICO app.

The commercials show legendary sports commentator Dick Vitale, Billy Blanks, Martins Licis, and Tag Team urging drivers to not drive distracted and turn on the Do Not Disturb While Driving mode when they are at the steering wheel. Vitale goes for a Dipsy-Doo Dunk-a-Roo for the big W over Distracted Driving, Licis, World’s Strongest Man, assures viewers they are not going a text from him asking them to join him eat steak and lift weights, Billy Blanks reminds them that they can’t miss a text from him if he never texts them in the first place, and Tag Team point out that drivers won’t receive a text from them asking for a rap solo.

The strongman demonstrated new ways to break down boxes that can also help you deal with some of the frustration of having to break down boxes in the first place, and Stephen Gibson & DC Glenn helped a woman with dessert and sang an original song set to the tune of their 1993 single “Whoomp! (There It Is)”.