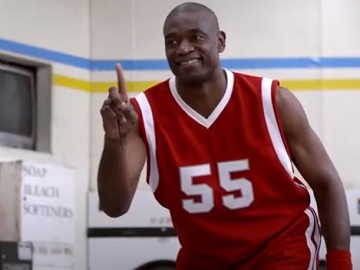 Iconic basketball player Dikembe Mutombo doesn’t let shots in to any basket (even off the court). This is what the latest GEICO ad shows us.

The spot features Mutombo in a range of everyday situations, stopping people from throwing items in baskets. For instance, a man in an office throws a piece of crumpled paper in the garbage can but Mutombo stops it. He also stops a woman from throwing her laundry in the basket, at the laundromat, a boy from throwing a box of cereals in the shopping cart, at the grocery store, and more, declaring, every single time, “Not in my house!”.

At the end of the commercial, two performers in a grocery store talk about how happy customers who switch to GEICO and save hundreds of dollars are. One of them says that they are happier than Dikembe Mutombo blocking a shot.

“Get happy. Get GEICO.” is the new tagline, before the voiceover mentions that “15 minutes could save you 15% or more”.

GEICO has enlisted several celebrities for its ad campaign over the years. Mutombo is only the latest in a growing roster, which also includes Tag Team members, Cecil Glenn and Steve Gibson, who perform a new version of their 1993 single “Whoomp! (There It Is)”, the world’s strongest man, Martins Licis, Tae Bo guru Billy Blanks, John Stamos, who shows off his knitting skills and shares a “secret” about his hair, his Full House co-star Dave Coulier, who is saved from the couch by a couple who are searching for the remote control, and more.