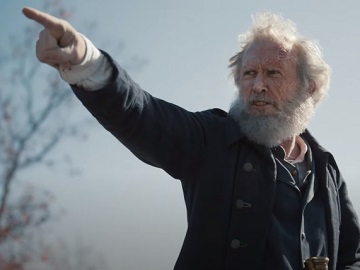 GEICO has dropped a new ad in its “What Are You Waiting For?” campaign.

The spot opens with the voiceover asking a woman named Sarah (Mary Stein) if she knew that GEICO could save her hundreds on car insurance and a whole lot more. As the woman drives her car in a parking lot, the voiceover asks her: “What are you waiting for? Captain Ahab to help you find a parking spot?” At this point, Captain Ahab (played by Steve Coulter) shows up near her, standing, with the upper part of his body through the sunroof, searching for a parking spot and giving her instructions. “Thar she blows!, “Pull hard to starboard!,” “To the northers lot where there be parking spaces as bis as whales!,” are some of his indications.

The ad concludes with the voiceover urging viewers to see all the ways they could save.

Another recent commercial in this campaign features the Tag Team helping a woman named Tasha with dessert. Equipped with ice cream scoops, Cecil Glenn and Steve Gibson are putting ice cream in bowls while singing a new version of their 1993 single “Whoomp! (There It Is)”, whose lyrics are changed, though, to fit the context.