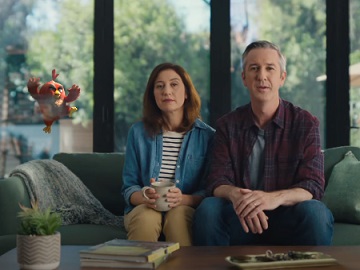 GEICO has released a new installment in its “Bundling Made Easy” campaign. This time, the homeowners deal with some infamous Angry Birds.

The spot features the couple talking about the advantages of their new home. They mention the great light due to the many windows they have, but as they list these qualities Angry Birds are seen wrecking havoc around their house. Damaged roof, broken plant pots, birds hitting the windows…. these are some of the things the homeowners need to deal with. Even their neighbor can’t help wondering why are those birds so angry.

There is a silver lining, though. GEICO helped them save by making bundling their home and car insurance easy.

The commercial ends with the voiceover urging viewers to visit the insurance company’s website for more information on bundling.