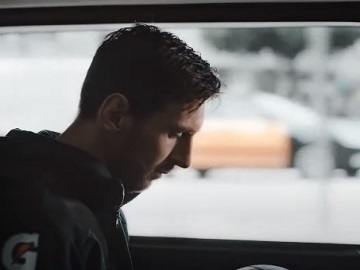 Gatorade continues its “Greatness Starts with G” campaign with a new installment, highlighting that “The greatest never settle”.

One of the spots features Leo Messi leaving the field with a football in a minivan and delivering in voiceover the following message: “I’ve always focused on being. The more you’ve scored, the more you should score. If you break a record then make it unbreakable. Settling is not an option. It doesn’t matter where you are. If you truly believe you can do more, you’ll do anything to prove it”.

The video ends with the taglines “The Greatest Never Settle” and “Greatness Starts with G” flashing across the screen.

The “”Greatness Starts with G” campaign debuted earlier this year, in May, and also features DK Metcalf, Jayson Tatum, Sydney McLaughlin, Christian Pulisic, Lizzi Smith, and Bryce Harper. The song used in the main ad, which promotes the brand’s Thirst Quencher, Super Shake and Gx System, is the 2020 single “Future Power Sources” by hip-hop duo Marlowe, made up of producer L’Orange and emcee Solemn Brigham.