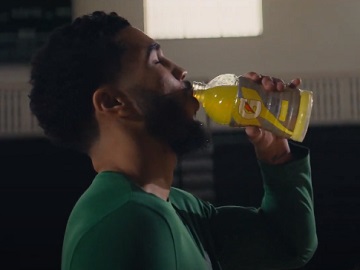 Gatorade has released a new ad to promote its drinks.

The spot features footage of DK Metcalf, Jayson Tatum, and Lizzi Smith training and drinking Gatorade. “GRIND” “GUT” and “Give Every Thing” appear on the screen, as the American football wide receiver for the Seattle Seahawks, Boston Celtics small forward, and the Paralympic swimmer do their best to push their own limits.

“DK Metcalf, Jayson Tatum, and Lizzi Smith know there are many paths to greatness, and they all start with G,” the description for the video reads.

The song used in the ad is the 2020 single “Future Power Sources” by hip-hop duo Marlowe, made up of producer L’Orange and emcee Solemn Brigham.

This is not the first commercial in which Gatorade aims to highlight that the best athletes in the world have one thing in common – Gatorade.

A spot released last year featured a diverse cast of athletes of then and now, including Serena Williams, J.J. Watt, Elena Delle Donne, Bryce Harper, Francisco Lindor, Jayson Tatum, Mallory Pugh, Lionel Messi, Michael Jordan, Peyton Manning, Misty May-Treanor, Todd Gurley, Zion Williamson, as they compete in their sports, and highlights that all of them are fueled by Gatorade sports drink. The tagline “Nothing Beats Gatorade” flashes across the screen, along with the Gatorade Frost, Gatorade Fruit Punch, Gatorade Lemon-Lime and Gatorade Orange.