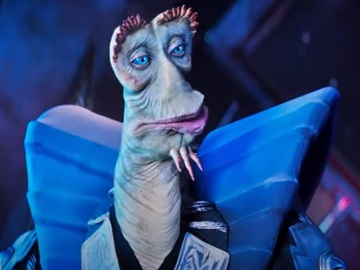 Freeview has launched a new TV advert to promote its Freeview Play, which offers an impressive 30,000+ hours of TV and over 700 boxsets, across your favorite on demand players, all for free.

The spot, created by Anomaly and brought to life by the puppeteering masters at Blinkink Productions, features an Alien Queen and her trusty, long-suffering assistant, Colin, who interrupts her when she’s about to invade Earth. The reason: he has picked some Freeview channels on the spaceship TV and shows her some of the many “human” shows available to watch for free. The variety of programs on Freeview Play fascinates the Queen, who eventually asks Colin to fetch the “good biscuits” and abandons her idea of conquering the planet.

The advert, which debuted during The Great British Bake Off on Tuesday 26th October, ends with the tagline “Crack Open the Good Biscuits” flashing across the screen.

Freeview says that the two characters, voiced by award-winning actors Samantha Spiro and Jamie Demetriou, will be seen regularly in the future as they will be popping up in owned and digital channels as well as partner retail environments.