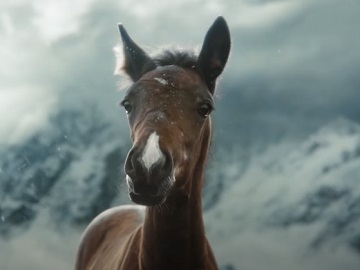 Ford showcases the 2021 Ford Bronco Sport and its seven “G.O.A.T.” driving modes in a heartwarming commercial, that tells the story of a horse raised by goats.

The spot, created by Wieden + Kennedy New York and directed by Imperial Woodpecker director Stacy Wall, features a herd of goats (Capra aegagrus hircus) who find a colt trapped under a rock, in the snowy mountains, and raise him as their own. “He struggled at first, uneasy on the snow, unsure on the rock, unstable on all things slippery,” the narrator says, revealing that, then, “he became strong, capable of handling any terrain. And the colt became a Bronco”.

As the video comes to an end, the 2021 Ford Bronco Sport, featuring seven available G.O.A.T. modes, that adapt the vehicle to go any type of terrain, is shown driving down the mountain road and off-road.

Filmed on Mt. Baker in Washington State’s North Cascades National Park, with almost all of the goats and horses real, the commercial is only one of the three installments in the automaker’s new campaign, titled “Built Wild”.

Previous: Kellogg’s My Perfect Bowl Corn Flakes Commercial
Next: RE/MAX The Right Agent Every Step of the Way Seriously Commercial