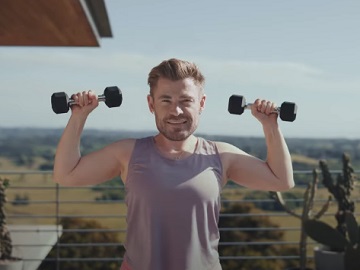 Fitness and wellness app Centr is promoted by Chris Hemsworth in a new commercial.

The spot, released with the tagline “You don’t have to be Chris Hemsworth to get results: You just need his team,”
features Hemsworth’s head on bodies of several persons using Centr, including women lifting weights and doing yoga,
a guy at the grill, and even a little girl riding around the house in a play vehicle.

“I’ll be honest: I only got this app in the first place because, well, it’s Chris Hemsworth. Obviously, he’s not the one doing the workouts but it’s his team, so it’s like, basically the same thing,” Hemsworth says while being in the body of a woman lifting weights overhead. While being in the body of a yogi he also praises the Centr team. “You know, Chris Hemsworth is actually pretty average, it’s his team that’s awesome,” he says.

The Centr team is comprised of experts in multiple fields, from strength and cardio, to yoga, cooking, nutrition, and meditation.

Centr, owned by Hemsworth and available on iOS, Android and web, aims to help users crush their goals in terms of
fitness and wellness, and offers a 7-day free trial.