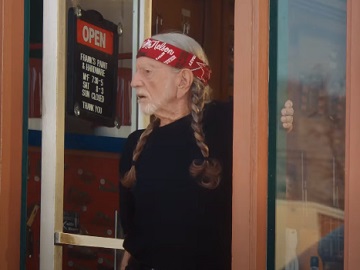 FedEx has launched a new ad to tout its sustainability goal.

The spot, created by BBDO New York, features oversized delivery boxes popping up in forests and town squares. As the video ends and the boxes open, it turns out they were housing a delivery man ready to deliver a reusable large pack, a truck and even a plane. Willie Nelson, whose song “Always on My Mind” serves as soundtrack, makes an appearance, saying – after seeing “Roxo”, the FedEx SameDay Delivery Bot (which is now in development) rolling by, that he thought he had seen it all.

The ad, which was launched on Nelson’s birthday, highlights that all FedEx packaging is recyclable, the company invests in more electric powered vehicles, and to work on aircraft fuel conservation as it strives for carbon neutrality by 2040.

The musical legend, who is also a recognized environmentalist, has also collaborated with Ad Council for a vaccination PSA, with Omega Mart and more.