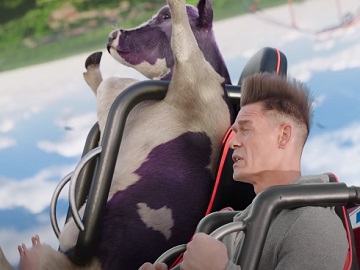 Experian promotes its Experian Boost feature, which can boost your credit scores instantly, free, and help you thus get new credit cards and lower interest rates, in a new commercial starring John Cena and his purple cow.

The spot features the actor/WWE wrestler and the purple cow in a roller coaster that suddenly stops, leaving many people, including Cena and his “pet”, upside down. At this point, one man asks what they are going to do do now and Cena advises him to boost his credit score instantly with Experian. After using Experian Boost, the man says he’s up 13 points and he got approved for a credit card, too.

The commercial ends with the voiceover urging viewers to boost their credit score instantly, free, with Experian and to visit the company’s website or get the mobile app.

John Cena and the purple cow have appeared in several other ads for Experian, so far. In one of them, he shows up on the purple cow at a party to help a young man boost his credit score and get the credit card he wants, in another one he’s leading a stampede of purple cows to save the day for a downtrodden man stranded with his broken down truck in the desert and a sign reading “credit denied”, in another one he sets free a young couple in a lab who are brainwashed to believe that a credit app called Credit-Rama will save them money, and in another ad he jumps from a plane on the cow, using a purple parachute personalized with the Experian logo.