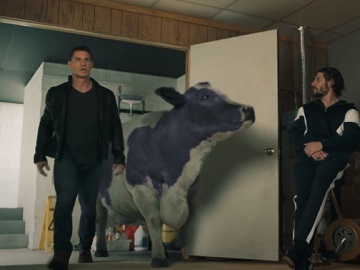 John Cena and his purple cow are back to the small screen in a new ad for Experian’s Boost credit service, which allows users to boost their credit score.

The spot features a young man who wants to apply for a loan and is told that he has two choices: sign it or sign it. He points out that there’s only one choice and mentions the crazy high interest rates. At this point, Cena and the purple cow break the door and the actor tells the guy to drop the pen before he signs that piece of paper. He also tells him that he can raise his credit score instantly with Experian. After trying the app’s Boost service, the young man thanks Cena for saving him money.

“Boost your credit scores and save, free, only with Experian,” the voiceover says at the end of the commercial.

The actor/WWE wrestler has starred in several other ads for Experian. In one of them, he shows up on the purple cow at a party to help a young man boost his credit score and get the credit card he wants, in another one he’s leading a stampede of purple cows to save the day for a downtrodden man stranded with his broken down truck in the desert and a sign reading “credit denied”, and in another ad he sets free a young couple in a lab who are brainwashed to believe that a credit app called Credit-Rama will save them money.