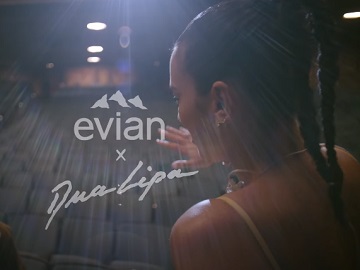 Evian has launched its first global campaign, titled “Drink True,” and enlisted its brand ambassador Dua Lipa to star in.

The pop star has recorded an a-cappella version of her single “Levitating”, which she performs in the commercial, directed by Vincent Haycock and created by Wieden + Kennedy Amsterdam. She’s also shown drinking Evian water.

“Stripping everything back to a beautiful and calm flow felt refreshingly different. It’s not often I get the chance to pause and sing my music a cappella, so I hope the fans enjoy it. I have always found that being true to myself is extremely empowering, and I love that it is important to Evian as well,” Dua Lipa said in a statement.

Evian has also teamed up with Manon Loschi, an 18-year-old pro freestyle skier born in the French Alps, who serves as a playful guide for viewers in a second commercial, which traces Evian’s journey from its icy source to recyclable bottles.

The “Drink True” campaign is set to run this year across TV, digital, social, out-of-home and point of sale in the U.S., Canada, China, Switzerland and the U.K.