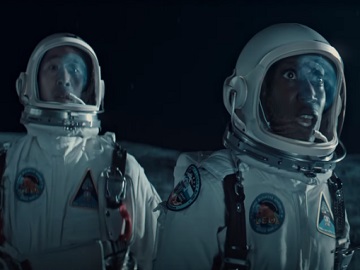 E*TRADE highlights that no one dreams of a late retirement in its new commercial, which urges people to start investing.

The spot features two astronauts on the Moon, looking at a pale blue dot in awe. “Jerry, you gotta see this!” they exclaim, talking to a third, older astronaut, who appears to be the driver of the vehicle they used for transportation. The veteran, who is just finishing up a crossword puzzle, says he has seen it. “Trust me, after 15 walks, it’s a little old,” he mentions, quite bored by the view. He also says, more to himself, that he should be retired by now and that he wishes he had invested when he had the chance.

The commercial ends with the onscreen lines “No one dreams of a late retirement” and with the voiceover saying the tagline “Stop waiting. Start investing”. The tagline “The Tools to Take on the Market” also flashes across the screen.

A previous commercial, scored by Jimmy Cliff’s “You Can Get It If You Really Want” and aimed at reminding us that “Lifelong dreams shouldn’t take a lifetime”, showed an old lady climbing the Everest using a walker.