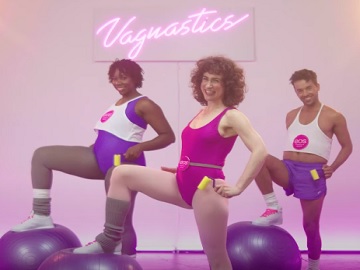 Eos and agency Mischief @ No Fixed Address have launched a new ad campaign, called “Vagnastics,” to promote its shaving cream.

The main spot, which leans into the spandex-and-neon ’80s aesthetic and created in the style of an aerobics video, features a group of three people explaining a few useful poses for the optimal shaving experience. The instructor encourages viewers to “get loose before shaving that goose” and demonstrates several moves, including the “Wartime Captain,” which involves propping a bent leg on nearest surface, “the Cello,” which involves stretched legs and a motion similar to playing the instrument, and “the Dust Buster”.

The video, which is broken down into smaller, 15-second videos that focus on a specific pose each, is set to run online and via paid social, including TikTok.

“Dads teaching their sons how to use a razor is the classic image we have in our head when we think about shaving tutorials. Not people awkwardly contorting their bodies into weird and wonderful shapes to tidy their genitals,” said Bianca Guimaraes, Mischief’s ecd in a press statement. “Shaving down there requires flexibility and poise.

Vagnastics can teach you these fundamentals. Normalize shaving down there and liberate your lady bits today,” she also declared.

Previous: Wendy’s $1.99 Breakfast Croissants Reggie Bush Commercial
Next: Cricket Wireless Supporter of HBCUs All I Do Is Win Commercial Song