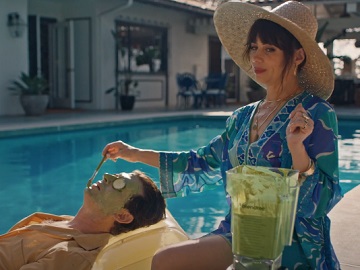 eBay has released a new ad for its Refurb Registry, which is a lot like a wedding registry, but for couples in need of a little post-pandemic relationship refurb.

The e-commerce company has enlisted Moshe Kasher and Natasha Leggero to star in a dedicated commercial and talk about how they got through the pandemic year. They say the secret consists in lots of couples counseling. “They say if you want to test a relationship you should go on vacation together and this was like 50 vacations together on house arrest. And now that things are starting to reopen, we tool a long hard look at our relationship and how we dealt with it,” they say before listing the items they bought or the things they did to deal with specific issues.

Natasha says that, apparently, gaming helps process anger issues and Moshe says that Natasha learned some amateur carpentry and built a shed, they tried some alternative beauty regimens, and created a Refurb Registry on eBay, “kind of like a wedding registry but will all certified refurbished products, which is described by the voiceover as “perfect for a couple that’s been locked together in a house for a year.

“Build your registry. We might just gift it all to you,” an onscreen line reads at the end of the commercial.