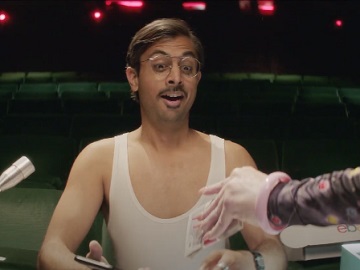 eBay UK has released a new advert, urging people to buy a new thing and sell an old thing on eBay, highlighting that “that thing could be someone’s everything”.

The spot, created in partnership with Craft and production house Riff Raff, highlights the material and emotional value unwanted goods can bring in the right hands by featuring various items as they find a new owner and a new home thanks to the e-commerce site. A woman sells her old shoes to another one, who’s wearing them during dance lessons, a man buys a scooter, which he proudly presents to his family, and a man sells his pink T-shirt, which arrives at a little girl. The latter also gets a toy initially thrown away in the bin.

eBay is thus encouraging members to get into the recycling habit and earn “some ching ching ching” too by selling off unwanted items. “Selling on eBay makes someone’s day.Buy a thing, sell a thing is what you should do. Like a boomerang, the love comes back to you. (…) Cause that thing could be someone’s everything,” are some of the song lyrics playing in the ad, which ends with the tagline “everyone’s everything”.

In another recent advert, eBay highlighted that purchasing from select small businesses has a direct impact on supporting disadvantaged communities, whether that’s providing job opportunities to people with disabilities, tackling social problems like homelessness, or helping to protect the environment.

The website has also been promoting its Certified Refurbished bargains and Brand Outlet designer items in a hilarious advert that features a guy named Dave who tells the story of how he started a health kick with his dog (Nobby) and met the girl of his dreams. Footage of him sharing the story is juxtaposed with footage of his friends asking questions or giving tips on what they can find on Ebay, such as outfits for going “out out” again, trainers, hairdryers “to rid yourself of the lockdown barnet,” a blender, and more.