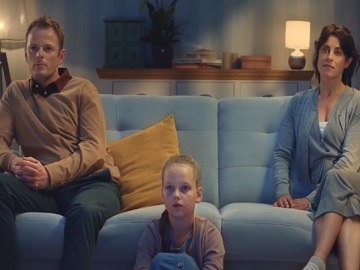 Duracell UK has released a hilarious new ad to promote its batteries.

The spot features a family of four watching a documentary about elephants on TV, in their living room. At some point, though, a mating scene leaves the parents speechless and willing to change the channel as soon as possible, so that their kids wouldn’t see the display of affection between the two animals. However, it seems that the remote doesn’t work. Luckily, the Duracell bunny shows and saves the day by putting two Duracell batteries in the remote control.

“Hang in there, remote. They’re counting on you to skip past this cringe fest. But don’t worry, these will keep you powering on until the next mating season,” the pink bunny tells the remote.

The advert ends with the brand’s mascot holding a Duracell battery in his paws while on the screen the tagline “Power On” appears.

Duracell is known for using an anthropomorphic pink rabbit powered by Duracell batteries as mascot. First introduced in North America in 1973, when the “Drumming Bunny” ad was launched, the cute bunny was slated to be a one-shot character but it became a trademark.

According to Duracell, its Ultra Type AA alkaline batteries have up to 100% more power for all devices. The brand’s range also includes Recharge Ultra AA Batteries, Hi-Speed Advanced Charger and more.