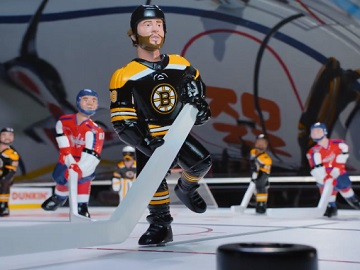 Dunkin’ promotes its cold brew in a new commercial, which urges you go inside the bubble with Dunkin’ and see David Pastrnak and T.J. Oshie play a little hockey.

The spot, which marks the first installment in the chain’s new “Inside the Bubble with Dunkin'” campaign, features the two star hockey players as bubble hockey arcade figurines who have a short conversation during a game. When Oshie notices that the Capitals goalie was out of the net, he asks him “Whoa, wait. You can pull the goalie in here?”. The goalie, who’s standing by the boards, drinking a Dunkin’ cold brew, confirms, saying he just went to get a Dunkin’ cold brew.

Asked if he isn’t worried about an empty net, the goalie answers he’s “pretty cool” and we soon learn the reason why: “the puck is in that spot that no one can really get to”.

When the camera pans to the respective spot, David Pastrnak’s figurine is shown spinning around to try and dig the puck out, but in vain. “Guys, I’m like super annoyed right now,” Pastrnak says.

At the end of the ad, the voiceover says “Where there’s hockey, there’s Dunkin’ so grab a cold brew for game time,” urging viewers to order ahead and earn rewards.

The “Empty Net” commercial, created in partnership with BBDO New York and Hornet, which brought the players to life, is Dunkin’ Donuts’ first-ever stop-motion work and will debut on Sunday during NBC’s NHL broadcast of the Philadelphia Flyers-Washington Capitals game.