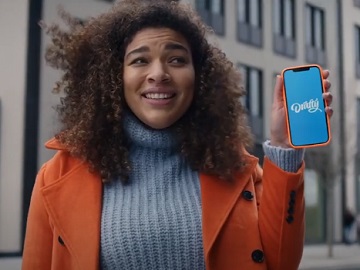 Drafty, a line of credit from Gain Credit LLC, is promoted in a new TV advert, featuring Emma, who – after seeing a group of men going to extremes to get some cash, steps in with a much better solution.

The spot opens with three masked men ready to rob a bank. The company’s spokeswoman, who’s in the area with her dog, tells them there’s an easier way to pay unexpected bills: Drafty. She explains that Drafty works like a pot of cash up to three thousand pounds and can send money to your bank in 90 seconds. “With Drafty, borrowing 100 pounds for a month cost just over a fiver,” she also adds, urging them to apply to drafty.co.uk and getting her smartphone back.

Emma appeared in a Drafty advert in 2019. Fed up by her latest bank fees, she received precious information from the Drafty dog, Zephyr, who told her the exact same things she told the three guys ready to rob the bank.