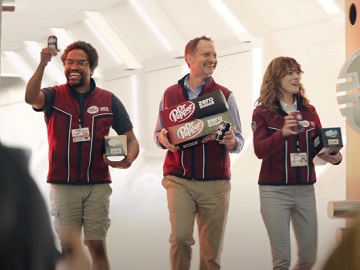 Dr Pepper has announced that its three new Zero Sugar varieties are finally here in a hilarious commercial.

The spot features three flavorists who, in 2005, were sent into a vault to perfect the impossible: Dr Pepper Zero Sugar and are now returning with the result of their 17-year work.

As they showcase the three new flavors with zero sugar, the three experts are also asked by a journalist to give some explanations. “What took so long?” the journalist wants to know. The flavorists start talking all at once, but the statement made by one of them, who says that he hasn’t seen his family in 16 years, strikes everyone. To his surprise, his wife and his son are in the audience and go to him. “My boy’s become a man,” he says looking at his grown-up son, clad in a T-shirt featuring the ‘No Regrets’ slogan and a hoodie. The latter gets to be among the first to taste the new Dr Pepper Zero Sugar and give a feedback. “It’s perfect, daddy!” he tells his father after taking a sip from the can.

The commercial ends with the voiceover saying the tagline “The zero you deserve is finally here”, which flashes across the screen along with the new Zero Sugar range, including Dr Pepper Zero Sugar Original, Dr Pepper Cherry Zero Sugar and Dr Pepper Cream Soda Zero Sugar.

The Zero Sugar variety of the carbonated sweet drink features a unique, bubbly blend of 23 fruity flavors, with zero calories. The brand’s offering also includes Diet Dr Pepper, which has 0 grams of sugar.