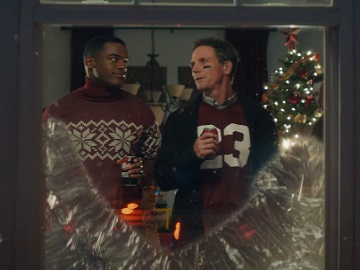 The spot, part of the Fansville series, features the residents worrying about what they will do in the off-season, now that the season in almost in the books. The town’s sheriff, played by Brian Bosworth, tells them to relax because it’s not as if they stop existing in the off-season. One of the fans intervenes, saying that it’s not like they all live in some fictional town that’s part of some elaborate marketing campaign. CJ’S State Fan Mom, played by Kate French, joins the conversation asking what this campaign would even be. “Dr Pepper?” she asks, bursting into laughter. They all start laughing out loud, cheering with their Dr Pepper cans, while her husband says “We’re real people. It’s not like we’re the ice cold Dr Pepper guy”.

The commercial, which also stars Jason Wiles as CJ’S State Fan Dad, Jay Reeves, Natasha Marc as Natalie, and Nick Ballard as Logan, ends with the Fansville residents shown in a tiny house in a Fansville-customised snow globe placed on the table of a fan who’s drinking Dr Pepper. The tagline “The one fans deserve” flashes across the screen.

The fourth season of Fansville, part of the brand’s sponsorship of the College Football Playoff and Presenting Sponsorship of the National Championship Trophy, which goes through 2026, features both current and former college football stars, including Joe Theismann and Clemson Tigers quarterback sensation DJ Uiagalelei. The drama series featuring parody storytelling from the college football fanatic town of Fansville has had many fans over the past years.