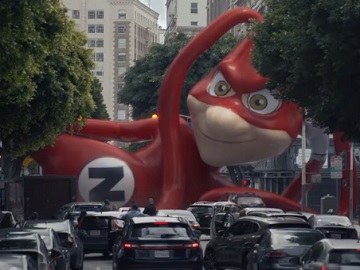 Domino’s Pizza has launched a new ad campaign, featuring the Noid, an antihero that has been trying to prevent great pizza delivery since 1986.

The spot features the pesky antihero trying to thwart the advanced technology of Nuro’s R2 robot, a completely autonomous, occupantless on-road vehicle, out on a pizza delivery. His attempts have no success as the R2 robot manages to deliver the pizza in time.

“At Domino’s we’re constantly innovating to find better ways to deliver you pizza, which is why we’re testing driverless delivery powered by Nuro and it’s got someone back to their old habits,” the voiceover says in the 60-second ad, which sees the Noid doing all kinds of things to stop Nuro’s vehicle from its mission, such as drilling holes in the road, putting trees down to stop the car, and even causing a traffic jam by blowing a huge inflatable Noid at a crossroads.

“Avoid the Noid when you get any two or more medium two-topping Domino’s pizzas delivered for just $5.99 each,” the voiceover says at the end of the commercial.

“The Noid is Domino’s oldest and most famous villain, and the pizza delivery testing we’re doing with Nuro’s autonomous vehicle is exactly the kind of technology innovation that could provoke the Noid to return,” said Kate Trumbull, Domino’s vice president of advertising. “However, after 35 years of practice in avoiding the Noid, we’re pretty confident we know how to defeat it”.

Starting May 7, the Noid will also be featured as one of the mini bosses in the newest installment of the Crash Bandicoot gaming series, Crash Bandicoot: On the Run!. In the new mobile adventure game, which honors the rich 25-year history of the beloved franchise, players fight against the Noid as Crash progresses through the story.

The Noid fans have now the chance to purchase “Hanging in There” and “Avoid the Noid” T-shirts sold by Domino’s.

Along the T-shirts, which are available in a limited number, though, there also are tumblers available for purchase on Amazon. All profits from the Noid merchandise will be donated to Domino’s Partners Foundation, an independent internal nonprofit organization that provides financial assistance to Domino’s franchise and corporate team members in need.