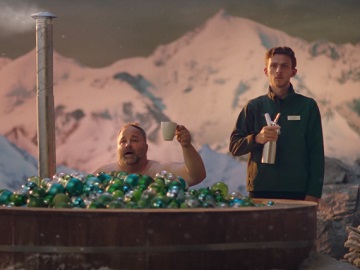 The advert features Brian, a man who’s “enjoying the ultimate indulgence of drinking luxury hot chocolate in a hot tub filled with Christmas baubles.” As he gets out to the surface from the tub, a waiter is right there, ready to fill his cup.

Serving as soundtrack is an original song composed by Goldstein Music Ltd.

Other two spots in the campaign, which is titled “The Joy of Dobbies” and premiered on November 9, feature Freddie the poodle enjoying the wind in his fur as he sledges down a mountain and a woman named Elaine who’s living out her on-stage fantasy while it’s raining mince pies.

The campaign marks the first work of London-based retail specialist ODD for Dobbies and introduces a new tagline, “Not Your Average Garden Centre”.

Dobbies has a diverse range of seasonal products, from gifts and decorations, trees and houseplants, to food and cookware essentials.

The retailer also offers on its website gifting ideas and tasty festive treats.