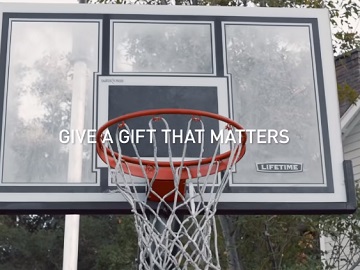 DICK’S Sporting Goods urges consumers, in one of its latest ads, to give a gift that will make a difference this holiday season.

The spot opens with a dad who surprises his daughter with a thoughtful gift on Christmas morning: a Lifetime in-ground and portable basketball hoop. She begins playing basketball and the hoop becomes her best friend. It also becomes a “witness” to numerous events in her life, such as the departure of a friend, celebrations, games with her dad and friends, and her own departure to college.

The end of the commercial sees the father all alone, throwing the basketball and scoring, while an onscreen line urges viewers to “Give a gift that matters”.

Serving as soundtrack is “American Beauty” by American band Drew Holcomb and the Neighbors, from their seventh studio album, “Medicine,” released in 2015. The song is available for purchase on Amazon for $0.99.