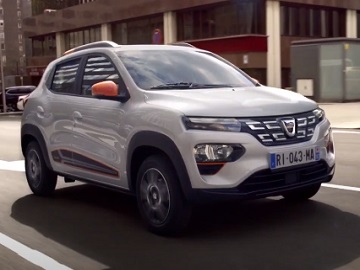 Dacia promotes its new Dacia Spring EV in a new commercial, highlighting that this car unveils a new era: electric mobility accessible to everyone.

The spot, created by Publicis Conseil, had been filmed in Madrid by James F. Coton and depicts a variety of situations that illustrate the idea of hyper-exclusivity, in which some people face rejection or are unable to get a particular product. Some people, for instance, are shown queueing up to buy a pair of ultra-limited-edition sneakers, others are shown trying to enter a club through the “VIP” entrance and being forbidden to do that, and others are shown trying to buy a pair of golden earphones but being unable because of their hefty price tag. On the other hand, Dacia Spring is presented as something accessible to everyone.

“Some things should be accessible to everyone. Just like electric cars.” onscreen lines read at the end of the commercial, which also features the tagline “New Dacia Spring. 100% Electric. Exclusive for Everyone” flashing across the screen. This is a nod to the fact that Dacia Spring will be the most affordable electric car in the European market.

Serving as soundtrack is a cover of the 1982 Tears for Fears song “Mad World”.