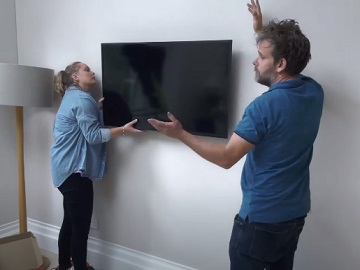 Currys, the UK’s largest electrical retailer, has merged its four brands – Currys PC World, Dixons Carphone, Carphone Warehouse, and Team Knowhow – to become one superbrand – Currys – and has launched a major new campaign to celebrate the relaunching of its UK stores and online services.

The spot, created by AMV BBDO, UK and titled “Who Needs Experts?,” features a series of home videos of people who tried to take on a job as an amateur but they ended up badly. Their DYI jobs, ranging from plumbing jobs, hair cutting and chain sawing a tree in the back garden, went horribly wrong and the “Who Needs Experts?” question obviously turns out rhetorical.

Currys highlights the importance of having an expert to do the job and urges customers to not hesitate to talk to their highly trained experts in stores or online, through a video chat available 27/7.

The song used in the advert is the 1981 song “Waltzinblack” by English rock band The Stranglers, from their fifth album, “The Gospel According to the Meninblack”.