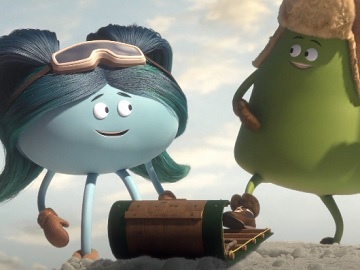 Cricket Wireless has dropped a series of new commercials to promote its latest offer for those who bring their number to Cricket.

One of them features two of the company’s fluffy mascots on a snowy hill imagining how their ride with a sled as fast as Cricket’s 5G would be. They see themselves sliding down the hill with the speed of light, leaving everyone in awe, and arriving in the outer space.

The carrier offers 5G on all plans starting at $25/line with 4 lines. Cricker Core is required on 4 lines. Additional fees, usage and restrictions apply.

Other commercials feature a woman making snow angels and another woman getting gift boxes with what Cricket includes, such as 5G network, HBO Max, Sam’s Club, and more, with the $60 Unlimited Plan.

The wireless service provider is known for using the cute mascots in its ad campaigns. The first mascot to announce the nationwide 5G was Rose. The cute green mascot was featured in a spot released in 2020, which saw her tell her friends with which she went stargazing, that Cricket has 5G nationwide. However, over the years, Cricket Wireless has also teamed up with a host of WWE Superstars for its marketing stunts, as well. Among them are Sasha Banks, Dolph Ziggler, Kofi Kingston, and more.