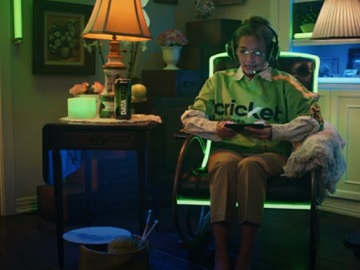 Cricket Wireless announces that it has nationwide 5G in one of its latest commercials.

The spot features the company’s round blue mascot, Barry, and a friend who is stunned to find out that his grandmother is a gamer. Sitting on a sofa, with cups of coffee in their hands, they are watching Nana crushing some noobs on her smartphone. “Must be that nationwide 5G she got from Cricket,” Barry says.

After finishing her “Data Fuel” can, she exclaims she got no mercy, which makes her grandson admit he is scared.

“More Phone, More Fun,” the voiceover says at the end of the commercial, which also sees the line “Cricket has Nationwide 5G flashing across the screen”.

The first mascot to announce the nationwide 5G was Rose. The cute green mascot was featured in a spot released in 2020, which saw her tell her friends with which she went stargazing, that Cricket has 5G nationwide.