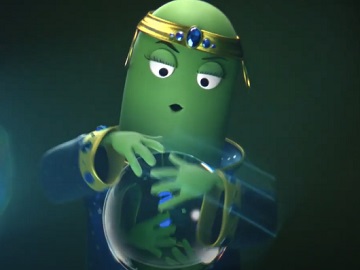 Cricket Wireless has released a new ad to highlight that you get 25GB of data for $40 a month if you stop wishing and start switching to Cricket.

The spot features the company’s mascot Rose as a fortune teller predicting the future with her crystal ball. Thus, for those seeking affordable wireless, the answer is “crystal clear”: Cricket Wireless.

“Get more than double the data for $40/month. Best part? Tax is included,” the voiceover says at the end of the 15-second commercial, adding the tagline “Stop wishing, start switching”.

In an older commercial, which featured Rose and two friends gazing at the stars from a hill top, the cute green mascot announced that Cricket has 5G nationwide.

She and her cuddly fellows have been featured in numerous ads over the years.

Green mascot Miles, for instance, was shown having a video call with Brian Posehn and sharing impressions about their beards. In another ad, which saw him have a video call with Bárbara de Regil, he gets motivated to work out.
Besides Miles and Rose, there are also Dusty, the round-shaped yellow one, Ramon, the round-shaped one with brown hair, and Chip, the square-shaped blue one. They were all brought together for the carrier’s 2018 holiday commercial, created by Argonaut, San Francisco, which highlighted that “The best holiday plans are the ones that bring us together”.

Over the years, the wireless service provider has also teamed up with a host of WWE Superstars, including Sasha Banks, Dolph Ziggler, and more, for its ad campaigns, including in-store events and live streams.