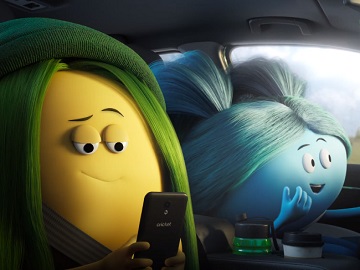 Cricket Wireless promotes its nationwide 5G in a new commercial.

The spot features two of the carrier’s cuddly mascots, one with blue hair and another one with green hair, having a conversation during a car ride. The one with blue hair, who’s at the wheel, asks how far for the next up, and immediately learns there are nine miles. She then starts a question with “How many” and her travel companion ends the question for her, giving also the answer. “How many cows in Texas?” “Ten million nine hundred thousand”. When she changes the subject, trying to say something about Cricket’s 5G, she says she knows it’s “freaky fast”.

The commercial ends with an onscreen line informing that the carrier’s fast and frienly nationwide 5G is part of its $60 Unlimited Plan.

“Evrything you want, including the price,” the voiceover says and the 2018 single “Alone” by David Lawrence & Velma Valentina starts playing.

The song, included on the Vintage Country” album, is available for purchase on Amazon for $0.99.