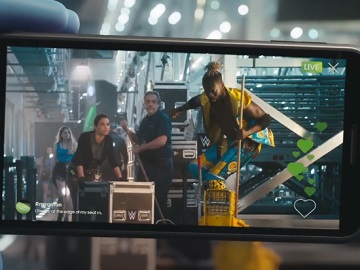 Cricket Wireless has released a new commercial to promote its deal which lets consumers save big with 4 lines for $100.

The spot features WWE Superstar Kofi Kingston as he leaves the ring without touching the floor. Two Cricket Wireless mascots look at him and even help him out by putting some pancakes on the ground so that Koki could step on them and get to his helicopter.

“Get 4 lines for $100/month,” the voiceover says at the end of the commercial, which also sees the tagline “Save like a superstar” flashing across the screen.

Last year, in November, Kingston and Chicago-area Cricket employees gave away 150 Thanksgiving dinners, including their choice of turkey or ham, potatoes and gravy, dressing, cornbread, cranberries, and green beans, to families in need at the local Salvation Army.

Over the years, the wireless service provider has also teamed up with a host of other WWE Superstars, including Sasha Banks, Dolph Ziggler, and more, for its ad campaigns, including in-store events and live streams.