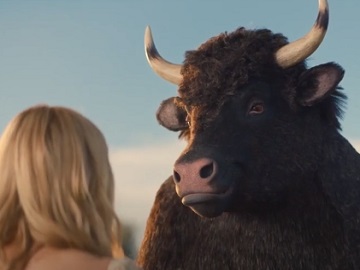 The spot features the hulking bovine walking on two legs and giving advice on money matters to a diverse cast of people, including a couple who is searching for loans online, while sitting on their front porch. Credibull tells them that Credible is a better way to find great loan rates and, in the meantime, goes to romantic dates with his girlfriend, Carly.

The commercial ends with the voiceover saying “Credible – Finding you great rates and never selling your data”.

Credible.com lets consumers instantly compare prequalified rates from multiple financial institutions for student loans, personal loans and mortgages, so they know exactly what they will pay.