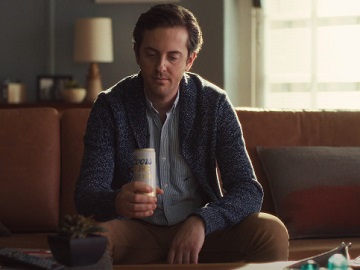 Coors promotes Coors Pure, its first USDA-certified organic beer, in a new commercial, which celebrates the small health and wellness wins in our daily lives.

The spot, created by New York-based agency Droga5 and directed by Jeff Low, features a man who, after opening a can of Coors Pure, hears the beer talking to him. Voiced by comedian Ali Wong, the beer can congratulates the man, named Matt, for having a bike ride in the morning, for using a standing desk when working from home, and for choosing the new Coors Pure, an organic beer, and tells him he is amazing. Matt is deeply moved by the pep talk and says that it means a lot for him coming from a beer.

The commercial, part of the brand’s “because you tried today” campaign, ends with the voiceover introducing the new Coors Pure, made with organic barley, organic hops and water. “With three simple ingredients, it’s organic, but chill about it,” the voiceover also says about the brewski, which has just 92 calories.

Droga5 associate creative director Bernardo González said that the inspiration for the new campaign came “from our collective mindset right now, and how an organic beer targeted to people that lead a healthy lifestyle could feel like a welcome friend and not just another thing yelling at us, demanding we try harder. The truth is: every health and wellness success during the past year and a half is a big success that deserves to be celebrated.” “So we decided to meet people where they are with some observational humor that champions the everyday attempts of regular people trying to lead healthy lives. We point out trying as the ultimate triumph,” González also said.