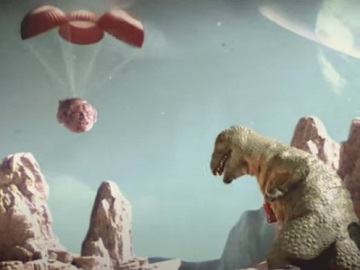 Coca-Cola promotes its new Coke Zero Sugar as the best Coke ever in a series of new commercials.

One of the spots features a dino holding a bottle of Coca-Cola Zero Sugar and proclaiming that it’s the best Coke ever. A meteorite heading toward him shouts “No”, but the dinosaur keeps saying “Yes” until it decides to interrupt its descent to Earth and try the drink first.

Another spot in the campaign features a diverse cast of people arguing over the new Coke Zero Sugar, with some of them saying “Yes” and others “No” as response to the question “Is it the best Coke ever?” A man with a beagle head, girls with rainbows getting out of their mouths, a skeleton are only some of the characters shown throughout the 15-second ad, which is scored by Papa Music’s “Yes? No? (I Need To Try It First)”.

The brand has promoted its Zero Sugar variety in several other ads in the past. One of them featured a man who returns home after having been abducted by aliens and brought back to Earth. Asked by his wife about the reason why he didn’t answer her phone calls, he tries to tell her the unbelievable thing that happened to him, but he stops because he sees a bottle of Coca-Cola Zero in her hand. Eventually, he concludes that the drink is delicious. As the spot ends, it turns out the aliens love it, too.