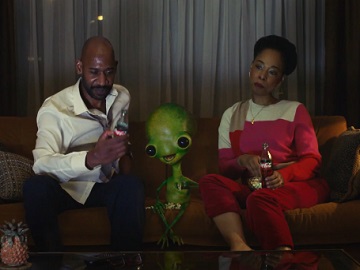 The spot opens with a man who returns home after having been abducted by aliens and brought back to Earth. Asked by his wife about the reason why he didn’t answer her phone calls, he tries to tell her the unbelievable thing that happened to him, but he stops because he sees a bottle of Coca-Cola Zero in her hand. “You bought a Coca-Cola with zero sugar?” he asks her surprised. “Yeah, why?” she asks, taking a sip. “Come on, it has zero sugar,” he declares, but his statement is met with an unbelievable statement from her: “It’s delicious!”. “I don’t believe it!” he exclaims, which makes his wife urge him to try something new because he’ll love it.

As the spot ends, it turns out the aliens love it, too. The last scene features the couple in their living room, joined by an alien, with the man concluding that Coca-Cola Zero Sugar does taste great.