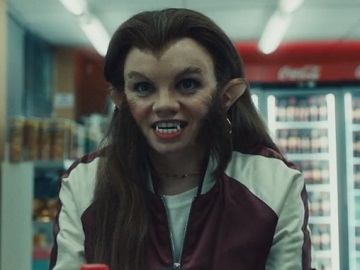 Coca-Cola promotes its Cherry and Vanilla flavors in a new commercial, released with the “Unbelievably Delicious”
tagline.

The 30-second spot, titled “Pit Stop,” is set in a convenience store and features a young woman looking like a werewolf grabbing three bottles of Coke, each of a different flavor, and going at the checkout counter, where she asks the cashier for a confirmation that it’s possible for a Coke to be part Cherry and part Vanilla at the same time. At this point, the employee opens a bottle and takes a sip out of it and then walks out from behind the counter. “I know, Coke flavors are almost too delicious to be true,” he tells her, who is surprised to see that he is a supernatural creature himself, with the legs of a goat.

The commercial ends with the tagline “Unbelievably Delicious” flashing across the screen, alongside the three Coke
flavors – Original, Cherry and Vanilla.

The “Unbelievable Delicious” campaign also includes spots for the Coke Zero. One of them features Pinocchio praising the taste of Coke Zero and trying to convince his father that he tells the truth. Another one features a man who returns home after having been abducted by aliens and doesn’t believe his wife, who tells him that Coke Zero is tasty and refreshing.

Previous: Mike’s Hard Lemonade Seltzer Mike Tyson at Party Commercial
Next: Aldi Easter I Like It Like That Advert Song