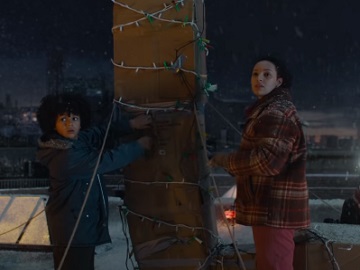 Coca-Cola highlights, in its Christmas commercial, that the Real Magic of the holiday does not come from presents and gifts, but from shared special moments together.

The ad, created by DentsuMB, features a young boy who has just moved into a new apartment with his mother and realizes, while watching a Christmas movie, that he doesn’t have a chimney, which makes it impossible for Santa to bring him gifts. He thus comes up with the idea of building a chimney out of cardboard boxes. Helped by all of his neighbors, except an old Asian lady, who seems to be grumpy all the time, the boy manages to finish the huge chimney just in time for Father Christmas to find their flat. The last cardboard box comes from the man working in the surveillance cameras room, who comes with a Coca-Cola box.

On Christmas morning, he finds a nicely wrapped gift box at the window of his room. The same box arrives at his Asian neighbor’s window. She opens it and finds a piece of paper with an invitation to join her neighbors at 1pm. The next shot features the boy, his mother, the old lady, and many other neighbors, all around the table, enjoying a feast. Coca-Cola bottles are placed on the table, as well.

The commercial, which ends with the onscreen line “The holidays are magic when we share them,” will run in 90 markets around the world, including the UK, US and Canada.